“She does not miss Richard. When he moved out, his absence felt more like a new presence than a subtraction.  The sweet calm that took up residence after he left filled more space than his human form and colossal ego ever did.  She did not miss him then or now.”

“And so you turned…and stood beside him on that corner, and when he cocked his head to look you up and down, waiting ever so long to smile but finally doing it, it did not mean that you were beautiful, it meant that you had a chance, just a chance, to see this being again, to find out what was in there, and it didn’t matter what you found out, in the end, because no one on earth would ever flash through you and light you up like he did.”

"The music in his laughter had a way of rounding off the missing notes in her soul." 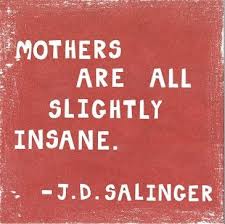 My youngest began his clerkship (or, as it’s called in the U.S. and on medical television shows, internship) this fall.  His first placement is with the Psychiatry Department of a local hospital.

I overheard him talking with one of his brothers – he’s ACTUALLY spent some time considering diagnoses that might be suitable for me!!  His dear sweet mother.  I’m not quite sure whether to be touched by his concern or pissed off that he thinks I’m nuts.  Or borderline nuts.  It’s one thing for me to admit to a certain (minor) level of craziness – it’s another to be labeled certifiably so.

He couldn’t find one!  Apparently, my (few) obsessive traits, astounding leaps of logic and quirky uniqueness don’t even come close to being considered a medical condition worth labeling or diagnosing.

“Best watch yourselves,” I responded.  “The apple doesn’t fall far from the tree.  Actually, there’s no way it possibly could unless there was a fierce wind, but anyway, apples falling from trees might land on your head so be careful in apple orchards.  And always listen to your mother.”

They exchanged glances and grins.  I grinned, too.  I was just messing with their minds.  Truly. 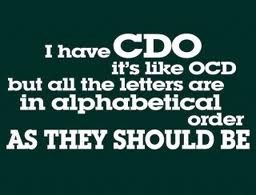 The fact the above makes perfect sense to me?  I’m not telling any of my kids –particularly son # 3.  I happen to think complete sanity is highly overrated.  I’m also going to start keeping some of my thoughts to myself.

photo credits: google images
Posted by Beth at 10:35 am 18 comments:

Time and Tide Wait for No (Wo)man